This is Part VII of a multi-part essay about my own personal experience with osteoporosis. I will be taking you through the diagnostic and treatment phases of my care in hopes that it provides you a better understanding of osteoporosis in general, and pearls that you can use to better your own bone health.

(Start from Part I)

The universe is made up of individual particles that “flow within a continuous energy field encompassing a wholeness much greater than the thought processes which attempt to break the particles from their sea of wholeness.”
David Bohm 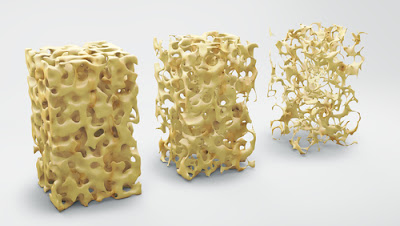 When I first opened the door into the world of osteoporosis research, it was like walking into an anatomy classroom filled with lots of skeletons. Half of them were broken, missing parts and scattered about, and there was no teacher, just a huge pile of books dumped in a corner. About the only thing I knew was that you were supposed to take calcium supplements and eat lots of dairy. But it didn’t take long, the first book or two on the pile, to make me see that popular ideas about osteoporosis were far from accurate. I had a long way to go and I knew it.

Conventional Western medicine looks for certain signs and symptoms in a patient to match with what are considered the characteristic signs and symptoms of a particular disease entity. The doctor can’t consider every physical manifestation that could be a clue to what is really going on because there just isn’t time. Where do they draw the line? What physical, mental, or emotional conditions in a patient are significant, and which are not? Western medicine tends to select a small number of symptoms to consider. For each general complaint–headache, back pain, insomnia–there is a brief checklist of questions and a list of diseases to match with the symptoms. In my case, the initial list at the endocrinologist’s office was twenty in length. The doctor’s objective was not to discover my individual pattern, but to figure out which of a few disease-categories my bones might be dropped into. Having a specific diagnosis, even if it is just called “idiopathic” (meaning “we don’t have a clue as to what the cause is…”) or “primary,” gives us the satisfaction of labeling–satisfaction that the ills are now neatly categorized, ready to be boxed and shipped out for treatment. To categorize is simply a way to feel in control.

The problem is that once we diagnose, it’s easy to stop thinking, stop observing. We stop looking for other answers, other possibilities and connections. The pressure is off; the diagnosis is there. But are we really under control…? With a diagnosis, the physician has a ticket to enter the medical superhighway with its trailer-loads of information, and thousands of other physicians and researchers traveling in the same direction. The superhighway feels safe, it’s familiar and well marked; but there’s lots of country that it passes right by.

I’m not saying we shouldn’t diagnose. But there are shortcomings in our way of doing it. Other healing practices approach the analysis of symptoms quite differently. In traditional acupuncture, as in my own chiropractic practice, listening to the patient is extremely important. The acupuncturist relies on the patient’s description of the problem that brought them in and on observing the patient–noticing how they move, how they hold themselves, the feel of their skin, their smell, their affect, their energy, even the tone of their voice. As the patient describes symptoms, they are encouraged to mention anything that strikes them as characteristic of their normal pattern, and everything they associate with their current problem.

I didn’t feel we were ready to label my loss of bone density with a diagnosis yet. I had no idea what the cause of the bone loss was, but I did know that there was an imbalance spurred by something… somewhere. One of the first tests the Dr. from UConn and I had ordered was the bone resorption marker N-telopeptide (NTX) and the results had come back abnormally high. A reading of 123 nmol/BCE/mmol creatinine with a reference range of 4 to 64* showed that I was loosing bone rapidly. What could cause the osteoclasts, the cells that break down bone, to be so aggressive? Was it diet, stress, over-training, or was it hormonal? Was it toxicity from chemicals or heavy metals? After all, the bone biopsy had shown that strange “zebra striping” appearance that the pathologist had said looked similar to cases of heavy metal toxicity that he had observed before. My biopsy slides hadn’t stained positive for iron, and blood and hair analysis’ didn’t show heavy metals…but tests can be wrong. Or, could it be that my kidneys or my intestinal tract were not functioning properly. I felt TOTALLY fine…I did not FEEL sick. How could my bones be crumbling? How could they be loosing so much density so rapidly and I not feel ANYTHING? Had my genetic makeup just written it that way?

The possibilities seemed endless. The endocrinologists wanted to stick my symptoms in the box labeled “idiopathic” with alendronate as the treatment of choice. But I didn’t understand. What did they expect me to do?…take a bisphosphonate drug for the next 45 years? I was only 46 years old, and I might live to be 90 (give or take a few). That just seemed ludicrous!

I wanted a doctor who could look at me as a whole, look at both my inner and outer self as one, not just a case of low bone density. It seemed that an acupuncturist trained in the Chinese healing tradition would be a good person to start with. When I asked the acupuncturist what she thought after her initial examination, she said that of the five elements that make up the body–water, wood, fire, earth, and metal–my constitution type was “fire” and that my smell was that of being “scorched.” I wasn’t quite sure what to make of this information, I didn’t know if it was significant in terms of my efforts to track down the cause of my disease and to make a treatment plan, but I added this information to what I had already found out. At this point in the process, it was just another clue as to how the different systems of my body were working…or, more accurately, not working.

“The whole may actually organize the parts.”
David Bohm

* With almost 20 years now of observing the bone resorption markers of hundreds of patients, it is my opinion that this reference range is totally useless. A better reference range for NTX (urine) would be 20 to 45. If a person’s NTX gets below 20, osteoclastic activity is probably too low to keep bone quality in the healthy range with minimal microfracture accumulation. If NTX gets over 45 then we run the risk of excess bone resorption and a net loss of bone density.