This is Part VI of a multi-part essay about my own personal experience with osteoporosis. I will be taking you through the diagnostic and treatment phases of my care in hopes that it provides you a better understanding of osteoporosis in general, and pearls that you can use to better your own bone health.

(Start from Part I)

“In this country we are brought up to underestimate the power of our own capacity to heal, to be ignorant of how to support and strengthen our ability to recover from illness, and to rely on external substances to counter disease, discomfort, and inadequacies of all kinds.”                                 Crucibles of Will

The first endocrinologist had given me two options: either do nothing until I began to self-destruct, or immediately start taking two drugs–thiazide, a diuretic that makes you urinate more but lose less calcium, and alendronate (Fosamax), a drug that stops bone loss, boosts your density, and lowers the risk of fracture. My new doctor from UConn disagreed about the thiazide, because while it may reduce calcium in the urine it can also inhibit calcium absorption from the gut.* The alendronate though, he was in total agreement with, and said that I should start it immediately.


Medications can be incredibly dramatic and effective gifts. But most drugs don’t fix things, they just interfere with bodily systems in such a way as to get a desired therapeutic effect–like taking drugs to improve one’s performance in sport. Gold medals are often won with the help of chemicals because for some athletes it is simply the color at the end of the chain that is important, not how you get it. The problem with drugs, besides being illegal in sport, is that the athlete never gets to find out who they really are, what they alone can really do. They are robbed of that special feeling of truly experiencing what it is like to give their whole self to a silence, to the unknown territory of their own potential–to an emptiness into which they bring the essence of who they are and offer it to the world.


I have always thought that it was important to pay attention to the underlying truth of any situation, and the natural integrity of other beings and of ourselves. That’s one of the reasons I went into chiropractic, a drugless profession, which tries to discover the whole truth behind a person’s injury or illness, and which respects the integrity of the individual’s body, including that body’s power to heal. Drugs certainly have their place in health care, but I feel that we should try to help people as naturally and wholly as possible–it seems like less of an insult upon the body–more pure and in harmony with the person’s whole being. Growing up, I could never understand how anyone could take a drug to make them something that they were not. So being told to take alendronate before we’d even tried natural alternatives was not only difficult for me to accept as the only answer to my health problem, but my resistance also had a practical side. Once a drug therapy is initiated there is no way of assessing the effects of a natural treatment plan.


Using bone density as an indicator of success or failure of a treatment regime for osteoporosis is impractical because density builds so slowly. But using specific lab tests to see changes in the body’s physiology, changes that would be beneficial in improving bone density, is more practical. If I could see improvement in lab values as a result of natural therapy, then I would know that my biochemical patterns were shifting in a good way, becoming more balanced. Starting the use of alendronate before more information was gathered would eliminate this important guide.


Alendronate is in the family of drugs called bisphosphonates that work by killing off (or at least making them really sick) all the osteoclasts, the cells that eat old, worn-out, and unstable bone. Normally, after the osteoclasts have resorbed the old bone, other cells, called osteoblasts, come along behind and make new, strong bone, in its place. This remodeling process is what keeps our bones healthy and resilient, and the interaction or coupling between the two cell types is a balancing act that needs to be maintained. It is precisely this coupling that the bisphosphonates disrupt.

I felt trapped…I knew very little about osteoporosis and even less about drugs. I was concerned, fearful actually, of breaking more bones and I didn’t want to fall into what looked like a big dark hole of the unknown. I was 46 years old…what were these doctors asking me to do?…take drugs for my skeleton for the rest of my life?…another 45 to 50 years?! It didn’t make sense.

All my life I had tried to respect my body, both to heal and to achieve in athletic competitions, with no help from synthetic chemicals of any kind. The only substance I ever used was what came naturally inside me. Now I was being asked to participate with the doctors in doing something to my body that destroyed part of its natural functioning. If I did this, I felt I would be betraying the body I had always tried hard to respect and improve.


The problem with bisphosphonates, and the newer drug Prolia, is that they shut down bone resorption but do nothing to encourage osteoblasts to form bone. In fact, it’s the osteoclasts that normally signal the osteoblasts to make new bone. With the osteoclasts gone from the scene, new bone just doesn’t get made. The overall effect is a decrease in bone remodeling with minimal increase in bone density. The reason bisphosphonates are able to reduce fractures is not from their paltry increase in the density of bone (which, is secondary in nature…in other words it isn’t primary new bone, just a secondary sprinkling of minerals onto the old weak scaffolding), but from a reduction in the number of small cuts of gouged out bone that the osteoclasts ordinarily make. Like the perforations that make it easy to tear pages from a notepad, these spots are vulnerable to fracture, even though they are a necessary part of remodeling. Where there is no remodeling, there are no temporary weak spots, and no focal areas where a little crack can get started. In normal bone these small cuts pose no problem, but if the overall density and strength of bone is low, these perforations become the ideal sites for catastrophic fractures to begin.

Older people are typically more sedentary and place less stress on their skeleton. Leaving the old bone in place by stopping remodeling, seems to work well in reducing the risk of fracture, even though the actual quality of the patient’s bone becomes arguably worse. How many years can a person go without remodeling before that old bone becomes so old that it’s more fragile than new bone would be with remodeling sites? That’s a big question and nobody knows the answer. For an 80-year-old it’s probably a reasonable risk. For a 46-year-old, it’s a question that hadn’t been tested much, and I wasn’t sure I wanted to volunteer to be a guinea pig. 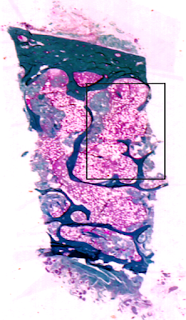 The UConn doctor was concerned that I was going to start getting some major fractures. Besides the two ribs from skiing and the new compression fracture from lifting the couch, I snapped two more ribs just leaning up against a horse to pick out its hooves…heard them snap, as easily as twigs on a dead pine. The literature was daunting; it referred to bone loss such as mine as irreversible. That’s one really ugly word, irreversible. It’s like saying some runner is unbeatable…so there’s no point in even trying…no point in even entering the race. The bone loss is considered irreversible because once the trabeculae, the small structural supports that give strength to inner bone are resorbed and become disconnected from surrounding bone, there is no way for new ones to reform. And when the new ones can’t form, and old ones don’t repair, the density just keeps going down and the risk of fracture keeps going up.

But everyone can be beaten; maybe not by me, but by someone. I finished back in the pack in a lot more races than I ever won, but even when it looks like you can’t win, you don’t know till you put yourself out there and run till you drop. It is sure a lot better to get on the starting line even if you only finish second or third, or last, than it is to just sit and think about it. With osteoporosis, it was even hard to tell who was toeing the line, what I was racing against–but I knew I wasn’t going to let this “irreversible” hype make me shy away from trying. I wanted to heal my body, not just take some calcium and hope for the best, and not just take some drugs that killed off some of my cells, interfered with my body’s natural processes, and made my bones old.

I knew no one was going to be committed to this program except me. But I was ready to give it everything I had. It wasn’t long before I started ordering a lot of my own lab tests and researching osteoporosis using every source I could find.

One of the first tests the doctor from UConn had ordered was N-telopeptide (NTX), a bone resorption marker that measures how much bone collagen is in your urine. When the osteoclasts tear down old microfractured bone, the shards of bone collagen go into the blood and is then flushed out of the body through the urine. If the lab results for NTX come back elevated, it means the osteoclastic activity is excessive and you are loosing bone rapidly. Rapid bone loss is a major risk factor for fracture and the higher the NTX the greater the risk of breaking something. In fact, if you take two people, both the same age, same build, same everything…and they have the same bone density…the one with the higher NTX will have a greater risk of fracture.

“Dont’ give up. It is still your turn to be in this world.”
Crucibles of Will

*  Taking a thiazide diuretic didn’t seem like a good idea even way back then when I didn’t know much about osteoporosis. Now, with about seventeen years of experience with this disease and working with patients with bone loss for at least ten, using thiazides to limit urine calcium loss seems like an even a worse idea. Thiazides interfere with trace mineral absorption, especially magnesium and zinc. Potassium depletion is very common with thiazides and can cause heart arrhythmias and glucose metabolism problems…not something you would want to have, especially if you are running marathons and competing in Ironman triathlons. Simply adding more vegetables to a person’s diet and having them supplement with boron, potassium and vitamin K-2 MK-4 almost always lowers urine calcium losses. A much safer approach.